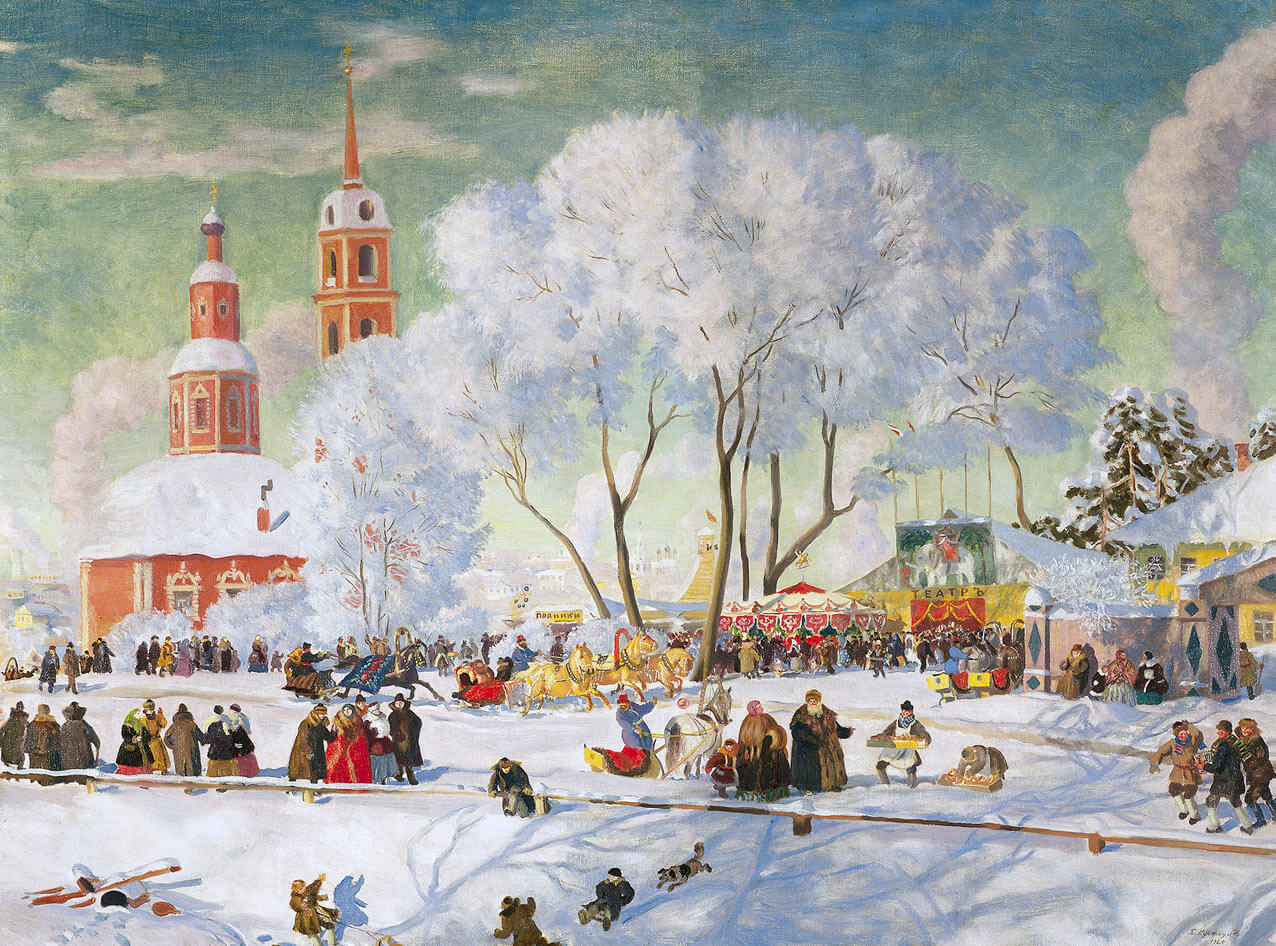 I want you to know more about Russian culture and my favorite Russian artist- Kustodiev.

Kustodiev Boris Mikhailovich (1878-1927) is a master of psychological portrait. Also, he was an author of a book of illustrations!

Kustodiev was a student of the legendary Repin! When he graduated from the Academy of Arts with outstanding achievements, he got an opportunity to go abroad in order to master his art skills! Kustodiev chose Paris, but because of nostalgia  he went back to Russia!

Why do I like this artist?? I love the brightness of his paintings, I love his images and stories that convey the beauty and flavor of the Russian culture!

Kustodiev loved folk art and popular prints. He studied folk tales, beliefs, and divination. Folk art was the object of his pride. He believed that in the eyes of people, the art is always a part of joy and fun.

But the most delightful trait in this man is his strong desire to create beauty despite everything! The artist was seriously ill and was treated for a long time in Switzerland, but he continued to paint! The most famous picture painted abroad was  “Купчихи”[Kupchihi] (Merchant women) as seen on the left.  In this picture he mixed reality and fantasy, the world he created contains features of reality, radiant beauty and something artificial. Elegant, pretty, full-breasted, portly women are talking unhurriedly. Their silk dresses are glittering glaringly, their painted shawls are sparkling with sonorous colors. At a distance, colorful signage shops are shining brightly echoing these dazzling outfits. Far away there is a red church with golden domes and its snow-white bell tower is silhouetted clearly. The world is perceived by the artist as a joyous holiday, funny and irrepressible.

In the painting “Купчихи” the artist admires portly, buxom, statuesque Russian beauty, in which there is something unusually captivating. Solar, yellow, pink, blue landscapes resonate with the brownish-red tone of her dress, colored shawl, all together joining in a bright colorful bouquet.

The creativity of Kustodiev remained radiant and optimistic, although his disease was progressing! Despite that, the artist continued to work hard. The complex operation which he had gone through was fruitless. He had full palsy of the legs. “My world is now – he wrote – just my room”. Till the end of his days, he was bedridden.

At that period, he drew several paintings titled “Масленица” [Maslenitsa] (Pancake week) I adore these paintings which are full of fun and frosty happiness! Масленица is a traditional folk festival, a highly anticipated meeting of spring and sendoff of winter. This is the time when various activities such as cooking of pancakes, building a snow town, tug of war, and sledging. Women get the best clothes out of their trunks. People put up tents to sell home-made goods. This is the time of colorful scarves, shawls, and colorful mittens.

In the pictures, the artist wanted to mention a reckless and dashing whirlwind of emotions. Kustodiev drawn from memory many paintings. The main characters of his works appeared as if cleansed of negativity: they are kind, poetic, and full of dignity. Kustodiev transmitted the brightest side of life in which there is a light, fun, happiness. Mасленица is a massive celebration, all the Russian people participate in the celebration despite their social status and material prosperity.

His paintings became more colorful and valuable as time time went on, eventually becoming national treasures.It carries an inspiring power and radiant feelings full of life. Well, is it possible to believe that these bright and vivid  pictures were painted by a bedridden man?

To me, his paintings are a testament to save one’s inner joy and optimism till the end despite everything.

P.S. If you are interested in my language- learn Russian online here