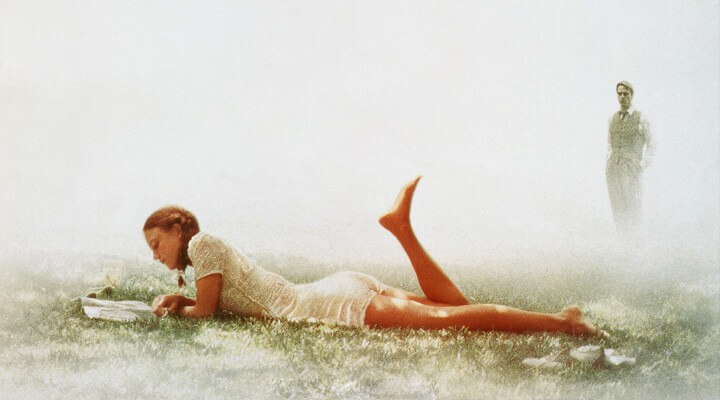 I am unaware of any other author of Russian descent who would be as popular in the US as Nabokov. Perhaps Ayn Rand is, but I’ll write about her later. Nabokov’s Lolita blew the minds of its readers, causing a flurry of criticism and genuine interest. The novel “Lolita” became the second best-selling book  in the United States (after “Gone with the Wind”): more than 100 thousand copies of Nabokov’s novel  were published within the first three weeks after its release.

Nabokov considered himself an American writer. He was born in Russia and educated in England, where he studied French literature, before spending fifteen years in Germany. Nabokov came to America in 1940: he decided to become an American citizen and made America his home.

I read  “Lolita” when I was a university student. I cannot say that this book filled my heart with great excitement. I am writing about it here because I want to draw your attention to the fact that this work was originally written in English by the author, and he only translated it into Russian later.

Nabokov said that it was his personal tragedy that he could not convey all the beauty of Russian syllables: “My personal tragedy, which can not and should not be touched by anybody, is that I had to abandon the natural speech and sacrifice the unfettered, rich and infinitely docile Russian language nature for the sake of my second-rate English”. He considered “Lolita” his main book written in English, and therefore Nabokov, himself, wrote the first version of the screenplay shot by Stanley Kubrick in 1962.

In 1997, Adrian Lyne directed his “Lolita.” The leading role was offered to Natalie Portman, but she refused it. Dustin Hoffman was supposed to play Humbert, but he could not do it because he was participating in the production of another film. Anyway, the film came out and received positive critical reviews,but the distribution of “Lolita” was limited.

Moreover, Lyne was threatened with the problem of finding a decent job if he decided to release  the vicious film. The film was banned in Australia until 1999: it was said to contribute to the spreading of pedophilia.

But let’s get back to the novel. Why did Nabokov decide to translate the book into Russian?

In an interview by Playboy magazine, he answered:

«Well, it occurred to me one day- while I was glancing at the varicolored spines of Lolita translations into languages I do not read, such as Japanese, Finnish or Arabic– that the list of unavoidable blunders in these fifteen or twenty versions would probably make, if collected, a fatter volume than any of them. I had checked the French translation, which was basically very good yet would have bristled with unavoidable errors had I not corrected them. But what could I do with Portuguese or Hebrew or Danish? Then I imagined something else.

I imagine that in some distant future somebody might produce a Russian version of Lolita. I trained my inner telescope upon that particular point in the distant future and I saw that every paragraph, pock-marked as it is with pitfalls, could lend itself to hideous mistranslation. In the hands of a harmful drudge, the Russian version of Lolita would be entirely degraded and botched by vulgar paraphrases or blunders. So I decided to translate it myself. Up to now I have about sixty pages ready»

There is another interesting remark Nabokov made about textual differences between Russian and English, from the Playboy interview:

“In sheer number of words, English is far richer than Russian. This is especially noticeable in nouns and adjectives…….On the other hand, there are words rendering certain nuances of motion and gesture and emotion in which Russian excels. Thus by changing the head of a verb, for which one may have a dozen different prefixes to choose from, one is able to make Russian express extremely fine shades of duration and intensity. English is, syntactically, an extremely flexible medium, but Russian can be given even more subtle twists and turns. Translating Russian into English is a little  easier than translating English into Russian, and 10 times easier than translating English into French”.

Well, my beautiful students, I am not going to retell you this whole article, you can find it here:

I just want to suggest that you read this book in its original language (that is what I have been doing for the last few weeks, training my English) and then read it in Russian if you learn the Russian language. This is a tough job which can help you to make your Russian speech more colorful.

Like this article if you agree with me, and I wish you good luck with this entertaining read. If you are interested in Russian language-learn Russian online. My Russian online lessons are here.