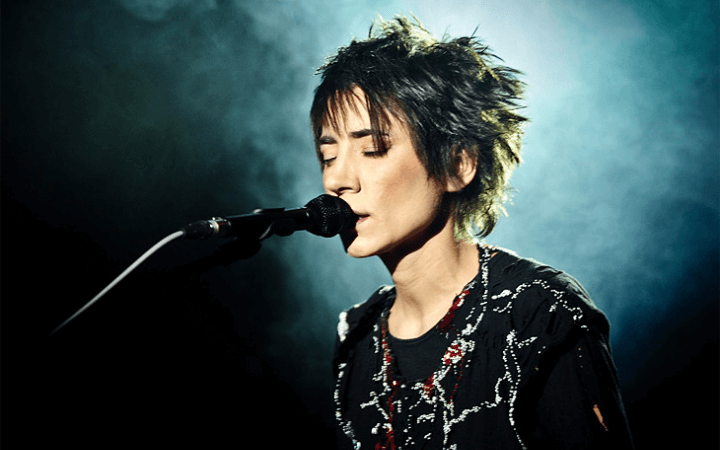 Frankly speaking, it was not easy for me to write about her! Too much and even more was written and said about this singer! There was a lot of truth and a lot of lies in those opuses! But it is obvious that she is a talented and extraordinary person! She was inspired by Tsoy (here is my article about him) like a million others!Her name is Zemfira!

I remember the beginning of the new century – the years 1999-2000! I was spending the time with family on the beach and the songs «Я задыхаюсь от нежности» and «Привет, ромашки» were played at every party! Maybe I was too young to understand the message of those songs! My mom, by the way, caught her lyrics very fast and became her fan! I became obsessed with Zemfira much later! Her second studio album,  «Прости меня моя любовь» («Forgive me, my love») is the masterpiece which I will always keep listening to till the end of my life! Zemfira’s musical style belongs to the genre of rock and pop rock. Journalists called it «female rock».

Zemfira is a life phenomenon! Her expression becomes your own! She is interesting enough to allow you to consider he

r a person who falls out of the mainstream! SHE IS NOT THE MAINSTREAM!  Just her existence is already the biggest  event in culture!
Our time sings with her voice!

Press conferences, many journalists investigations, gossips about her personality are nothing in comparison with her talent! I know why people admire her – she is honest, her lyrics is pure integrity, in which she opened her soul to her listeners! She tells about herself in her songs! Thanks to this, Zemfira gained the trust of people ages ago!

Zemfira’s egocentrism is unlimited. That is why she can speak and sing only about herself. Zemfira is a perfect lone tree endowed with a divine talent! She writes the texts for her songs, she produces her own clips, because it is difficult  for her to trust others!  She is a perfectionist about work!

“I set very high standards for others, for my songs, for myself. I  am often dissatisfied with the musicians, with myself, with the audience. Sometimes it seems to me that the audience could be more active and love me more. I am a zealot who is absolutely devoted to his profession! I’m obsessed with it. And I think obsession is the trait that many of my colleagues should have to a bigger extent. I am interested in everything in our process: how a piano is decorated, how the backstage is arranged, what microphones Brian May uses to get sound out of his guitar, what monitors Annie Lennox uses, how Massive Attack synchronizes the screens and the drum machine.

Everything is important to me. I want to try everything. Perfectionism is my cross to bear. Sometimes I think it’s a mental illness. That it is not normal. Although the word “normal” seems a deficiency to me”

Today her songs are not played at every corner as before, but thousands of people follow her and visit her concerts! She remains one of the most commercially successful singers in the history of Russian music.

Here are my favorite her songs:

P.S. If you are interested in Russian-learn Russian online.